Sample Magic has released version 1.2 of its Magic AB referencing plug-in for Windows and Mac. 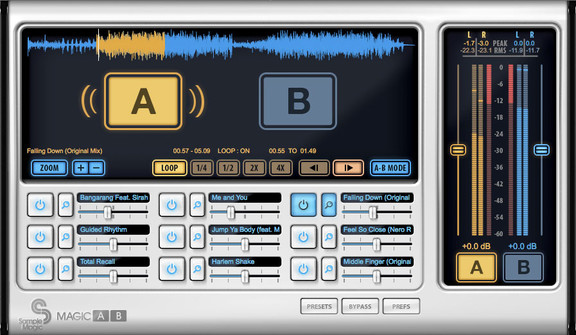 Magic AB is a simple, powerful reference tool that allows you to switch between the audio you are working on and up to nine tracks in an instant.

The update fixes several issues, including mp3 loading on Windows, and it future-proofs against potential problems that may arise when updating the host DAW, with specific improvements for Logic, Cubase, Wavelab and more.

Sample Magic recommends that all customers update to V1.1.2 by logging into the MY PLUGINS members area at www.samplemagic.com and downloading the most recent version of Magic AB.

To check which version you are running, click on the PREFS tab on the lower part of the plugin. The waveform display will change to show you the version number.