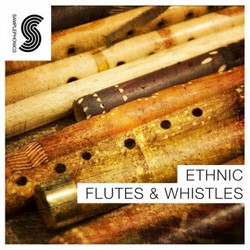 Samplephonics releases Ethnic Flutes & Whistles, a collection of loops and one shots by Snake Davis.

Played by none other than the seasoned king of woodwind, Snake Davis, who has worked with the likes of George Martin, Sting, Tom Jones, M People, George Michael and Tina Turner to name just a few.

Styles range across East Asian, African, Traditional Folk and Celtic folk music, and are available to use as 2 or 4 bar loops, longer phrases, one shot flutters, held notes and trills. The sounds are all recorded with meticulous attention to detail, and can be used in pretty much any type of music, from cinematic, ambient/downtempo and orchestral to hip hop, deep house and ambient dubstep. Try reversing and looping for some really cool ambient sound effects, or chopping and resampling for some great little melodic stabs.