Samplerbanks has announced the release of Drum Sound and Beat Creation – Ultrabeat, a video tutorial by Sound Guru featuring more than 3 hours of advanced knowledge about creating your own drum sounds in Logic’s drum machine. 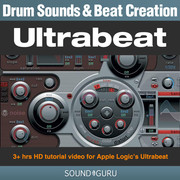 Yet while many people use its presets or load up the occasional sample, few use Ultrabeat to its full potential. With Ultrabeat you can create your own sounds from scratch, or emulate classic drum machines, before morphing them dynamically across complex patterns. In Ultrabeat: Drum Sounds & Beat Creation instructor delve deep to show you how every feature works, then you’ll use that knowledge to build your own awesome percussion sounds in the 3.2 hours of HD video.

The tutorials are split into two parts:

Part 1 explains Ultrabeat’s layout and how all its features work, from pattern creation to synthesis. Although Ultrabeat can seem intimidating, these videos break it down into simple chunks, and you’ll find it quick, easy and fun to edit and create your own sounds.

Part 2 delves into the exciting world of synthesising your own drum and percussion sounds. You’ll learn everything from how to recreate classic 808 sounds to making far out and unusual electronic percussion. You’ll also discover Ultrabeat’s rarely used sound morphing capabilities.