Samples From Mars has announced the release of OB From Mars, a sample library featuring the sounds of the Oberheim OB-SX all-analog, 6-voice poly synth from the early 80s.

OB From Mars includes 42 multi-sampled OB-SX patches, 23 of which are factory presets and the remaining are custom presets. 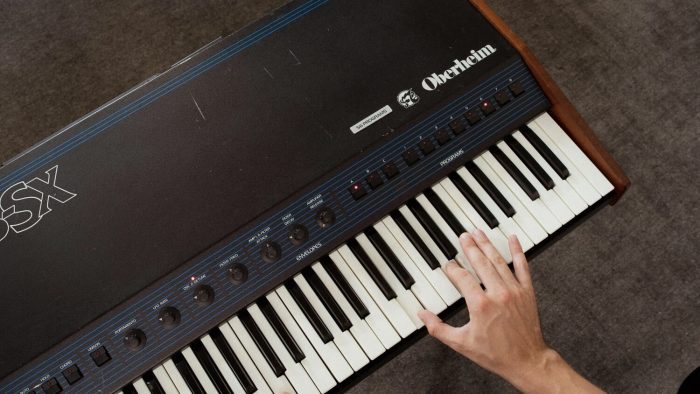 After sampling our favorite factory sounds, we dove head first into weeks of synthesis until we felt we had rinsed this synth of all possible patches (well, as much is realistic while sampling a synth). We sampled 19 custom presets, with the hopes of bringing the synth into less-explored sonic territory.

But how – this synth only has a couple knobs, right? Yes. Except that our OB-SX has a midi modification which allows for full access of the synthesis parameters that make this synth such a dynamic beast. This is what makes it capable of custom sounds similar to the OB-X and OBXa sounds.

With the mod, we were able to access both ADSRs, VCOs, detuning, cross modulation, and even a midi voice parameter that allowed us to either re-trigger the same voice while sampling (which allows for extremely clean and consistent sound) or, as the OB naturally plays, cycle through the slightly detuned and extremely characterful six voices.

The sample library is available for the intro price of $19 USD for a limited time (regular $29 USD). It supports various formats (Ableton Live, Kontakt, Logic, Reason, SFZ Player and Wav).

ProducerSpot launches Banger Bundle 2 at 62% OFF