Loopmasters has launched the Riddim & Dubstep Uprising Bundle from Black Octopus Sound, a collection of 3 sound packs at 45% off the regular price. 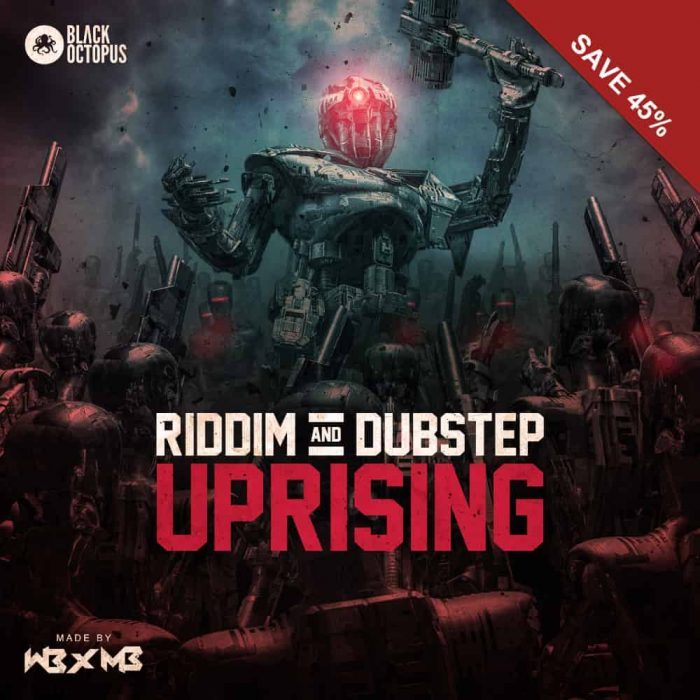 The bundle combines three chart topping Riddim and Dubstep packs for a total of nearly 2 GB of content, including thousands of samples and synth presets.

Welcome to the Uprising! The world was in pure chaos. The alien’s had destroyed all that we know, until WB x MB came to rescue those that survived. When approached by the alien race, they noticed they were made of metal, and the only way to destroy them was with HEAVY. MUTANT. BASS!

The Riddim and Dubstep Allstars are back! This time with a bundle of all of their packs, which includes Riddim & Dubstep Devastation, Riddim & Dubstep Apocalypse, Riddim Invasion and now, with this bundle, is an absolutely GAME CHANGING Expansion Pack!

We are talking some of the most deadly Drum Loops, One Shots, FX, Music Loops, Bass One Shots and Serum Presets that you can get your hands on! The Expansion Pack alone is a HUGE pack, and fits nicely as an addition to the others in the bundle. WB x MB have carefully crafted sounds and loops that pull straight from all the chart topping and biggest Riddim and Dubstep sounds of current times. And this allows you to make your own hit tracks just like the biggest all stars of the game, including themselves, WB x MB!