Plugin Boutique has announced an exclusive 50% discount on the Retro Hit virtual instrument by BeatSkillz, featuring a collection of drum sounds recorded from vintage drum machines such as the E-mu SP-12, OB-Mx, LinnDrum and Fairlight. 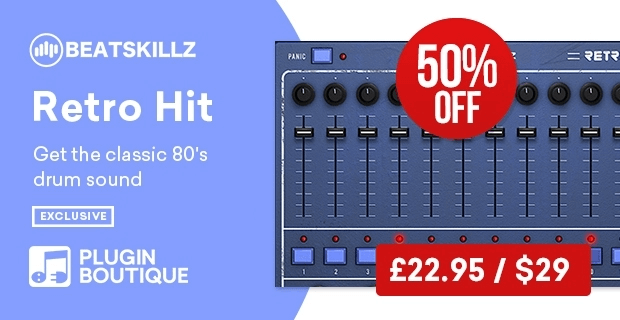 The sounds were tracked and recorded through a selection of tube and solid state preamps and compressors such as the Neve 1073, Thermionic Culture Rooster, and Electrodyne pres, Distressor, API 2500 and Drawmer 1978.

As the 80s sound is back and has been creeping up in modern chart topper tracks by major artists, as well as new soundtracks for tv series and film, we couldn’t hold back and had to release a drum plugin based on the hit sound of the 80s. Retro Hit is inspired from the pop/ dance and rock sound of popular bands and artists from the 1980s.

The plugin provides 50 Drum kits of Kicks, Snares, Hats, Cymbals, Claps, Toms ,FX and Percussion which are available as processed versions already treated with eq, compression and reverb, and also some dry versions. We wanted to provide the processed sounds as well, so that the producer/ musician can be instantly inspired and can get to producing music, rather than tweaking the raw sounds from scratch. Dry untreated versions are also provided for those who want to tweak them on their own.

Soundiron’s Voices of Gaia session vocalist collections are 50% OFF