Plugin Boutique has announced an exclusive sale on Photosounder, offering 60% off on the software that allows you to transform any sound as an image and to create any possible sound from an image. 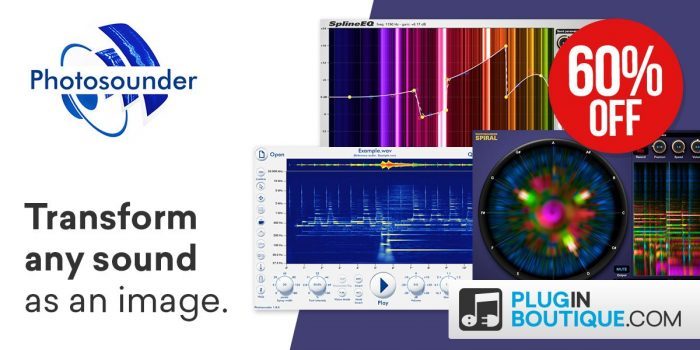 Every sound you’ve ever heard can be represented as an image and all possible sounds can be made from an image. Only Photosounder truly allows you to transform any sound as an image and to create any possible sound from an image. It is the ultimate bridge between the graphical world and the audio world, bringing the full power of image editing to the service of creating and transforming sounds.

Photosounder is the first audio editor/synthesizer to have an entirely image-based approach to sound creation and editing. Thanks to its powerful and omnipotent synthesis algorithms, it is capable of creating any sound possible. Powerful built-in image editing tools, some yet unknown to general image editing programs, are specifically tailored to enable you to create and edit sounds with ease in ways and with results simply impossible with other programs.

Photosounder for Windows and Mac is on sale for $31 USD until November 26th (regular $79 USD).

Create melodies, chords, and drum patterns with Harvest, on sale at 50% OFF

Waves celebrates 28th Anniversary with a sale on its top plugin...

Download a free collection of Serum synth presets from Loopmasters!

Acoustic Lounge sample library by Ueberschall on sale for $39.99 USD

Orbit delivers cinematic synths and atmospheric textures, on sale for $149...