Plugin Boutique has announced a sale on two EZX expansion packs for the ToonTrack EZdrummer 2 and Superior Drummer virtual drum instruments by Toontrack. 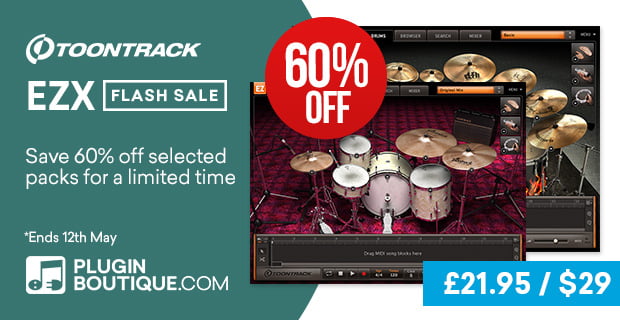 Drumkit From Hell EZX was one of the first expansions to be released for EZdrummer and has since become an institution in the metal community. It was derived and remastered from the original 1999 Drumkit From Hell sessions that would come to spearhead the drum sample business and start Toontrack’s longstanding position as the unquestioned leader and innovator in the field. Now, more than a decade later and still used and heralded by top artists and producers, the Drumkit From Hell sounds are every bit as relevant.

The Vintage Rock EZX is based around one of the world’s most classic, timeless and famed drum kits, the legendary Ludwig Keystone. Starting in the mid 1960s, this classic and forever timeless set of drums was immortalized by a long string of influential artists and drummers like The Beatles’ Ringo Starr and John Bonham of Led Zeppelin. It was recorded in London’s noted 2 kHz Studio by engineer Peter Henderson and drummer Chris Whitten.

Tack Piano for Kontakt by Wavesfactory on sale at 25% OFF