The Nashville EZX and Music City USA SDX expansion packs for Toontrack’s EZdrummer and Superior Drummer are on sale at up to 75% off for a limited time. 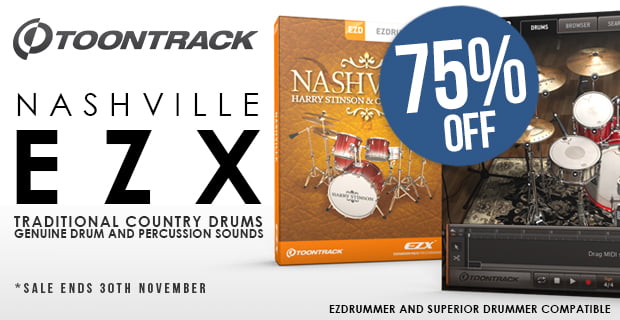 The Nashville EZX presents a library of round, warm and genuine drum and percussion sounds that takes the traditional country heart of Nashville as its starting point, but branches out into something far bigger – sounds that work in any traditional or contemporary beat-driven track.

The Nashville EZX was recorded at the city’s own hot spot, The Soundkitchen Studios, by two of Nashville’s most influential names in engineering and overall musicianship: Chuck Ainlay and Harry Stinson. Chuck is a Grammy Award-winning engineer with a mind-blowing track record, Harry a multi-instrumentalist, artist and engineer/producer with number one status in all those fields. Between them, they have worked with artists like Dire Straits, Emmylou Harris, Steve Earle and Martina McBride. 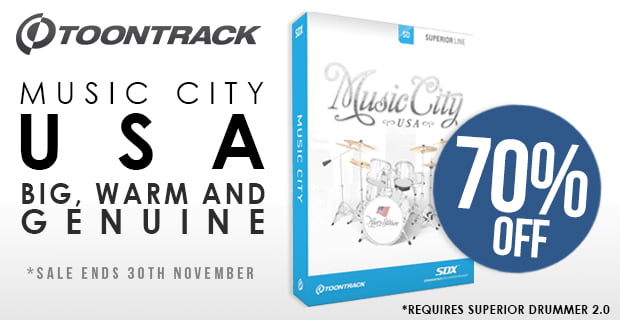 The Music City SDX is the original recording its sibling, the much praised Nasville EZX, is derived from. It was recorded in Nashville own hot-spot, the Sound Kitchen Studios. These facilities have been named “Nashville’s Best Recording Studio” by Music Row Magazine and have a main room widely known for its big and warm sonic qualities.

The Music City SDX comes with a PB Drum Co. kit sampled with both sticks, brushes and hands. On top of that, it features a unique Slingerland Vintage 1968 set and a wide range of snares and cymbals as well as an extensive MIDI library.

The Music City SDX presents big, warm and genuine drums that you can hone, mold and shape to fit in any style of music – from country to pop, rock and soul.

Both expansion packs are on sale at Plugin Boutique until December 1st, 2016.