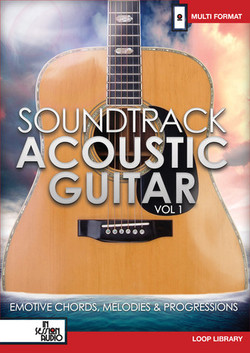 Imagine this: You’re in the movie theater, the lights dim and the screen is dark. An acoustic guitar begins playing a melody as the first scene begins. Moving with richness and simplicity, the guitar sets a tone that is carried through to the film’s end. A soundtrack tells as much about the movie as the dialogue, set or costumes. It sets the stage for what you will feel.

Soundtrack Acoustic Guitar presents a sensitive finger-tip touch to an array of emotive chords, progressions and single line melodies. Performed and recorded with sophistication and depth, this loop library can set a foundation or top off an existing idea for anyone producing delicate and expressive music.