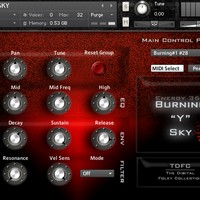 Burning Y Sky can be defined as a “burning objects passing by” instrument.

Burning Y Sky can be used for a scene in a sci-fi movie or a simple movement of a graphic object. It uses parameter “Y” of the surround panner of Kontakt to allow the user the passage of the chosen sounds, front-back or back-front to follow the movement, slow or fast, of an object in the space. Burning Y Sky can also allow the free movement in a surround environment by assigning the surround panner automation knobs to a joy stick. 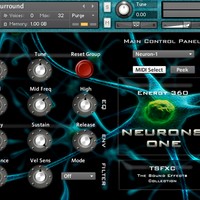 It contains abstract sounds that could be associated with visual scenes like: the activity of neuronal connections or scenes including strange sensations and other weird «buzz», radiant energy, magnetic field, etc. This set contains 62 “Neurons SFX-Instruments”. There are 61 individual instruments and 1 “All Neurons SFX-Instruments” including the 61 original samples distributed from C1 to C6 keys.

When activating the “Select Midi” button, each key strike will bring up its own “Main Control” and keep it in memory. You will have the opportunity to change the sound settings for one key (sound) without affecting other sounds. Now blend it! Playing many keys will offer you the possibility of many surprising soundscapes.

The sound libraries are available to purchase for $19.95 CAD each. Kontakt 3 or later full version is required. The Surround panner preset needs Kontakt 4 or later.