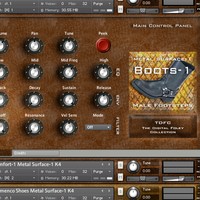 Signo SFX-Instruments has announced the release of the Footsteps Metal Surface-1 Bundle, a sound fx library for Native Instruments Kontakt and Logic EXS24.

This collection of footsteps was produced on a metal surface that can be used for metal footbridges, rooms control, space stations, fire escapes, surfaces of pumping station, hangars, warehouses and many other.

A total of 1232 samples of clean footsteps recording on a metal surface and then merge to the One Key Cycle.

The sample library is available for Kontakt (full retail) and EXS24, priced at $64.95 CAD.