Signum Audio has announced a major update to its loudness suite, integrating additional limiting functionality along with “smart” workflow improvements.

BUTE Loudness Suite 2 equips mixing and mastering engineers with everything required for loudness metering and True Peak Brickwall limiting to optimize their mix within loudness specifications, set internally or by delivery platforms, for quality assurance.

The main improvement to BUTE-LS2, from the previous BUTE Loudness Suite, is the integration of configurable limiting settings in the main user interface. The release time is automatically configured based on multiple properties of the input signal, and the release dial can be used to set the multiplication factor of the calculated release time, enabling fine tuning.

Pre-gain is also adjustable, as is the selection of a preset limiting curve – Transparent, Natural or Smooth – which are designed to preserve the qualities of the original mix. 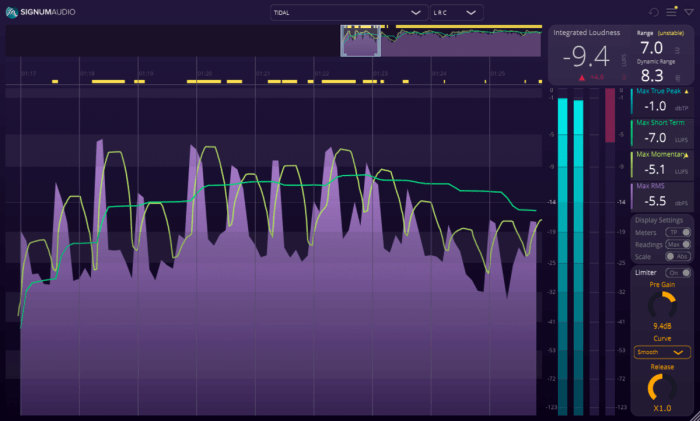 Limiting functionality is retained in BUTE-LS2’s compact read-out view, which is completely scalable, and useful for optimizing screen estate when working with multiple programs simultaneously. BUTE-LS2’s display settings are accessible from the main user interface. Easily toggle between readings for True Peak/LUFS Metering (new), Relative/Absolute Scale, and Max/Live modes to get a variety of read-outs. A Dynamic Range read-out has been included, based on requests from users.

Performance and compatibility with VST, AU and AAX (including Audio Suite) formats has been significantly improved. BUTE-LS2 auto-syncs to the DAW on load-up and automatically re-meters instantaneously on the graphical user interface to reflect alterations, which is a particularly useful feature for workflow support.

In the Surround version, BUTE-LS2 auto-detects the channel configuration being used in the DAW, with a drop-down menu to select the desired configuration and obtain channel input readings for up to 7.1.2 Atmos.

“BUTE-LS2 is one of the most specialised loudness metering and limiting toolkits available to the post-production industry.” He added, “We believe that smart plugins, designed to optimise workflows, are the future of digital studios and we look forward to releasing new software in the area of dynamics.”

The latest update includes the same improvements, aside from the limiting functionality, to the BUTE Loudness Analyser 2, or BUTE-LA2.

To celebrate the launch of BUTE-LS2, Signum Audio has teamed up with Plugin Boutique to offer a discount on BUTE-LS2 until the end of March.

W.A. Production Bass for Ascension and Progressive Deep for Babylon

Collaborate in any DAW, anytime, anywhere with Satellite Plugins 2.0