Signum Audio has announced the release of a major upgrade and redesign of the widely celebrated BUTE Limiter. 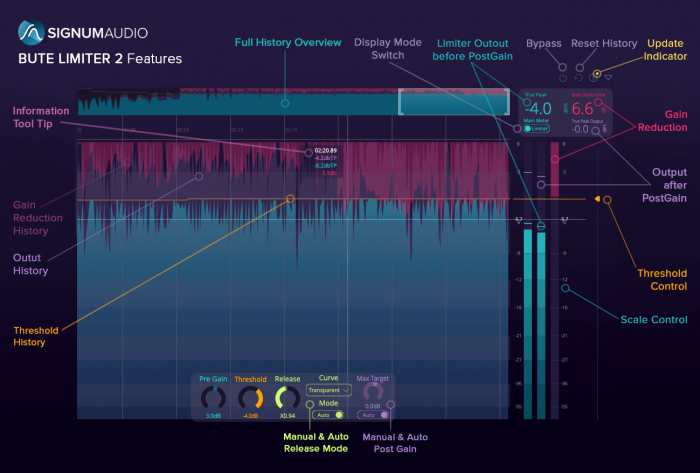 BUTE Limiter 2 is driven by Signum Audio’s novel limiting algorithm which is specifically designed for utmost transparency. For version 2 the algorithm has been further refined to deliver even better performance at extreme settings. Improvements to the algorithm include better bass response and support for shorter release times.

BUTE Limiter 2 also features advanced adaptive auto release. The optimal release is calculated by analyzing the audio input and dynamically adapting the release time. The auto release length can still be configured to fit different types of audio best, similar to traditional limiter release settings, but sounding much more natural than a fixed release length. As a result, BUTE Limiter 2 delivers smooth and ultra-transparent limiting that keeps the character of your master while taking care of any intersample peaks.

Whether you’re looking for an in depth analysis of your master or a compact readout – BUTE Limiter 2 can do it all.

BUTE Limiter 2 features a resizable history view which lets you interactively examine true peak, gain reduction, threshold and output readings – you can choose to see an overview of your whole master or zoom in to a particular part.

If any true peak overshoots are introduced via the post gain functionality, BUTE Limiter 2 will flag them prominently in the history with warnings. The history also supports re-metering via automatic DAW sync and will get updated if you change your limiter settings so you can see how your new settings affect your audio.

BUTE Limiter 2 also offers a meter bar view and for those with limited screen estate a very compact readout view. 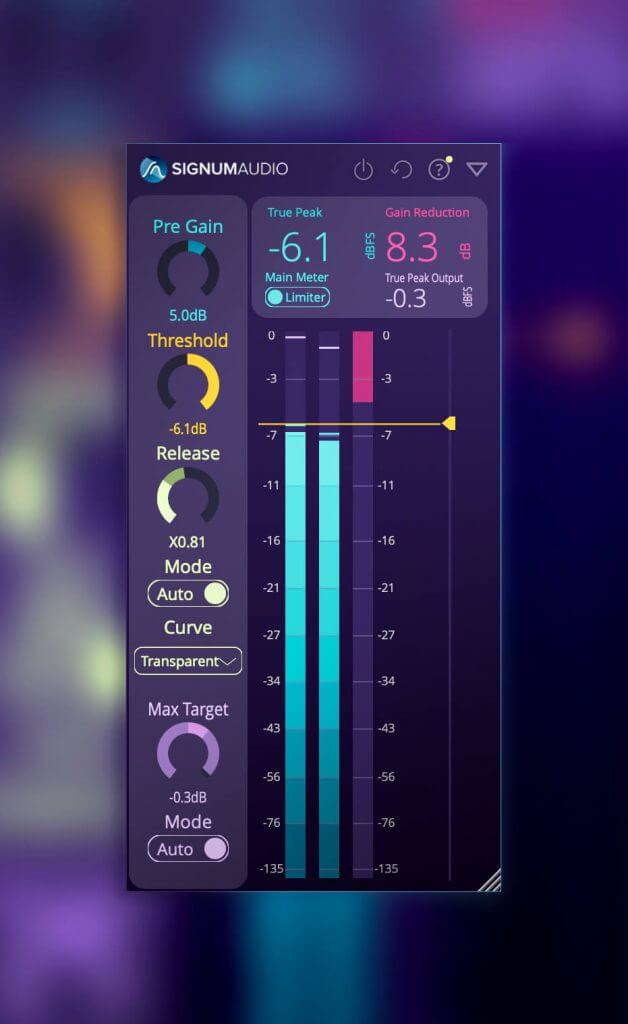 BUTE Limiter 2 includes a Pre Gain to push or reduce the incoming signal’s volume before Limiting as well as Post Gain that will be applied after limiting.

The plugin can be configured to highlight either the limiter output or the overall output, that is limiter output with applied Post Gain. So whether you like to push the limiter via Pre Gain like a maximizer, or limit your signal and then use Post Gain to make up for the change in volume – BUTE Limiter 2 provides you with a streamlined display for your workflow.

Even more, Post Gain is complemented with an automatic Max Target functionality that allows you to set a maximum output target that you would like to reach once the limiter hits the threshold. The BUTE Limiter 2 algorithm will make sure that you never go past this Max Target.

BUTE Limiter 2 is available now from Signum Audio and distributor Plugin Boutique, priced £59 GBP for the Stereo version and £99 GBP for the Surround version.

The plugin is free to both BUTE Limiter and BUTE Loudness Suite users, and new users can try the plugin with a free 10-day trial.