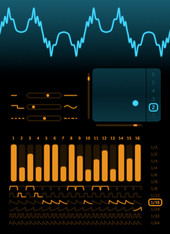 The newly updated Turbo S and Dynamo are available as AudioUnit plugins for Mac OS X Leopard or later, for $39 USD each. These updates are free to all existing users.