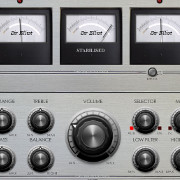 Sir Elliot’s 1977 Preamplifier is aimed for those who master music that would like a rich tone with a touch of character.

The 1977 Preamplifier performs superb on Jazz & Dance music that sounds too flat.

This Preamplifier was designed on a 192 kHz platform to take full advantage of high sample rates ranging from 88.2 to 192 kHz however, will function fine on low sample rates such as 48 & 44.1 kHz.

The 1977 Preamplifier is available to download as a freeware VST effect plugin for Windows.