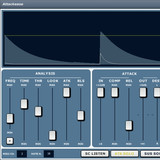 SKnote has released Attackease, a VST effect for Windows PC.

Attackease is available as a VST effect plug-in for Windows PC for 129 EUR (ex. VAT). A demo version will be available soon.

Visit SKnote for more information and some audio demos.