The legendary 1980’s SSL SL 4000 E is one of the all-time classic consoles and has been featured on countless great recordings. The release of these new E-Series EQ and E-Series Dynamics Modules makes the gritty tonal character of the channel processing from this much-loved console available to a new group of users.

The SSL console sound has been available in 12 different modules for SSL’s own modular X-Rack system for many years. The system enjoys a large and enthusiastic customer base (more than 15,000 modules sold) that reap the benefits of the very high-quality power supply and on board TotalRecall™ offered by SSL‘s X-Rack. The release of two modules for the widely-used 500 Series modular rack platform makes a small slice of the SSL sound available to a wider user base. The new modules will be shown at the forthcoming 2012 AES Show in San Francisco (Booth 1005) 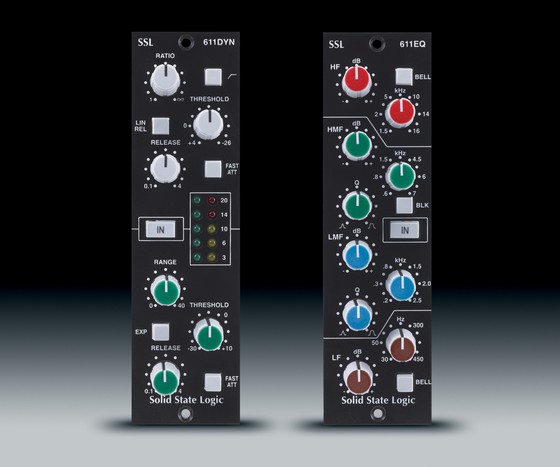 The new E-Series Dynamics and EQ modules for API’s 500 series.

The E-Series Dynamics Module features a compressor/limiter and an expander/gate, both of which return faithfully to the circuitry and key components that define the sound of the original SL 611 E Series channel strip. A true RMS converter is used in the side chain while the gain element is an all-discrete design identical to the Class A VCA chip used in the original unit.

The compressor contains additional switching options that allow a user to defeat the over-easy curve and to use a linear release instead of the more usual logarithmic curve. The result is a compressor with three distinct voices, each with its own musical character.

The E-Series EQ Module for 500 Series racks features two different EQ’s found on editions of the console produced between 1979 and 1987. Each EQ has unique response curves and tonal character.

Historically, the type of EQ fitted in an individual console was distinguished by the colors used on the LF knob caps so the two flavors have become known as the ‘Brown’ and ‘Black’ EQ’s. On the E-Series EQ Module, you can switch between these two different flavors of EQ that have been loved by generations of professional producers.

The SSL channel EQ is the classic four band design with fully parametric LMF and HMF with Q controls, which has become the industry standard channel EQ configuration. The E-Series EQ features selectable shelving or Bell curve operation for the LF and HF frequencies.