Sonic Charge has announced the release of a VST and Audio Unit version of Echobode, a delay effect with a frequency shifter placed inside the feedback loop. 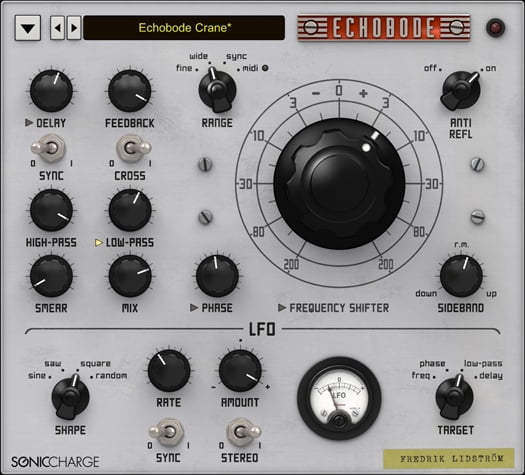 Originally released in 2012 as a Rack Extension for Reason only, it instantly became a favorite effect within the Reason community. The following year a mutation of this device also appeared in Teenage Engineering’s OP-1 synthesizer under the name of CWO. Now VST and Audio Unit users can also enjoy this unique mixture of frequency shifting and modulated delay.

We also took this opportunity to improve on the design and add some exciting new features like a “smear” section for spacey reverb-like sounds and plenty of new modulation possibilities. As usual with Sonic Charge products Echobode hides an immensely deep and versatile sound engine beneath a deceptively simple user interface.

Echobode for Windows and Mac (VST/AU) is available for purchase for $44 USD (ex VAT). Echobode is now also included in the complete Sonic Charge bundle and the price for the bundle has been increased accordingly to $255 USD (ex VAT).