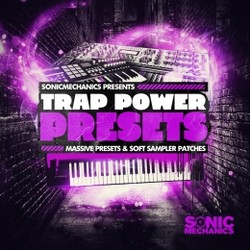 Sonically crafted to work with all major samplers Trap Power presets distributes the heavy sub end and sparkling highs that are needed in this cutting edge genre.

A violent mix of electro synths and southern 808 flavours Trap is the new variety on the block that can’t be stopped. Smashing apart the mainstream scene there’s a huge demand for the sounds that will make you stand out in this new landscape.

Fit to burst with different flavours Trap power presets includes 808 sub power, fierce stabs and sharp synth selections. The pack comes in a multitude of different formats including Native Instruments Massive, The 60 massive presets feature Macro controls which enable the user to alter the sounds effects with ease and even transform the sound into a new alternate version. With 60 presets and 60 alternate synth settings the Kontakt, Exs24, HALion and SF2 presets consist of a combined 120 presets to substantially swell your sonic arsenal!