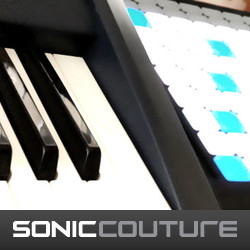 We get sent quite a lot of links to music that uses our stuff via email or Facebook or Twitter, and we like that, we really do.

But the problem is, it then gets lost – it isn’t all collected in one place. So, we’d like to start up a long term user track library. Eventually the tracks will appear somewhere on the relevant product page, but for now, we thought we’d kick things off with a small competition.

So – send us a track, any track, as long as it uses a Soniccouture instrument or sound, even the free ones, and the best 10 will be voted on by you, and the one with the most votes will win $500.

We’ve set it up so that it is done via Soundcloud, because it’s really handy. We figure most of you will have a Soundcloud account already, but if not, it’s well worth having.

The Winner will be announced October 31st 2013.