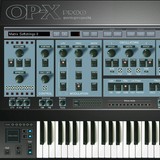 While OP-X PRO-II version 1.0 has worked well for most of you, we’ve received some host specific bug reports and some driver incompatibility reports over the past months which we’ve collected and examinated, and we have worked hard to address them so that OP-X PRO-II offers a completely stable performance too in these special cases.

We’re proud to be able to offer an 1.1 bugfix update now which should address nearly all of the reported possible issues. Have a look at the full list below.