SONiVOX has announced the release of Pitch2MIDI, a real-time audio-to-MIDI synthesizer and converter software. 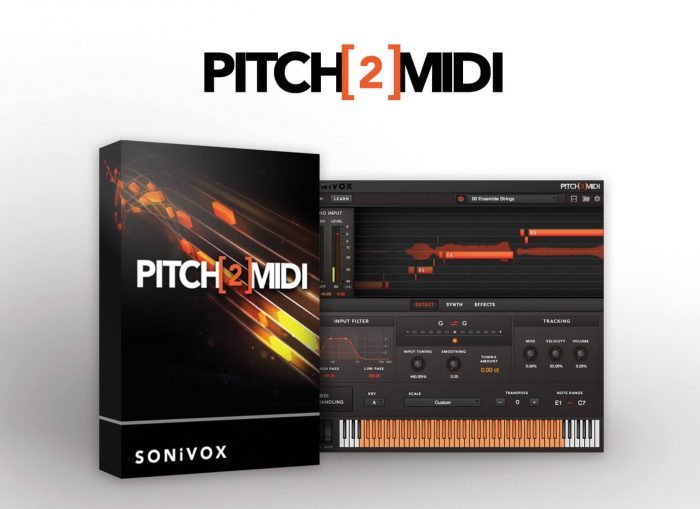 SONiVOX recognizes that singers and instrumentalists also want the ability to play and record music with software virtual instruments. But until today, they haven’t been able to do so in the same way as their keyboard or drum controller co-musicians have. Now they can. This is because SONiVOX’s Pitch2MIDI software plugin doesn’t require you to record your audio first, then stop and wait to hear the results as the audio is pre-processed. SONiVOX’s Pitch2MIDI software works in real time, immediately converting the audio signal into MIDI events so you can hear the results while your singing or playing. The old way of first having to record your audio severely hampered the artist’s ability to create spontaneously. With Pitch2MIDI, artists can sing or play while hearing their virtual instruments at the same time.

Pitch2MIDI is an audio effect plug-in that takes real-time vocal or instrumental monophonic audio input and instantly transforms it into accurate MIDI output. Using the built-in synthesizer, artists can use their voice or instrument to play any one of over 100 synth sounds directly, or bypass the internal synth and send MIDI out to any of hundreds of popular virtual instruments on the market. Since it’s real-time, it’s not necessary to record the audio first or process it before hearing the results. Instead, it’s instantaneous—MIDI output is created as the artist sings or plays!

Not only will vocalists and instrumentalists love using this, but it’s also perfect for producers too. Now they can immediately add new sonic layers and textures to their audio tracks, without needing to do any post-recording processing.

Pitch2MIDI sets creativity free by removing the “record-then-process” obstacle. If you can hear it in your imagination, Pitch2MIDI will deliver it in reality!

“Pitch2MIDI completely changes the game for vocalists, acoustic instrumentalists, electric guitarists and bassists—really anybody who plays a non-MIDI producing instrument. Using Pitch2MIDI, all these musicians now have access to the thousands of popular virtual instruments and synthesizers on the market,” said Jennifer Hruska, Director of Content Development for inMusic Brands. “Even better, they can experiment and perfect their performance since the plugin doesn’t need to preprocess the audio first.”

Pitch2MIDI for Windows and Mac (VST/AU/AAX) is available for purchase for $149.99 USD.