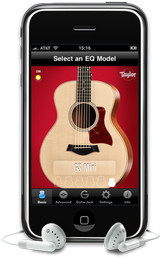 Sonoma Wire Works has teamed up with Taylor Guitars to create the free Taylor EQ app: an input EQ for enhancing the sound of a Taylor guitar when played through GuitarJack on an iOS device. Select from a range of EQ presets that complement Taylor’s signature guitar body shapes, including the Grand Auditorium, Grand Symphony, Grand Concert, Dreadnought, T5, or the new GS Mini.

Each EQ preset was custom designed by Taylor Guitars’ engineers to optimize the tone of each body shape for use with the GuitarJack. Customize your own presets and play along with songs from your iTunes library, making the Taylor EQ the perfect practice tool for any guitar owner. Taylor EQ is the first free app to include the GuitarJack control panel, which allows users to configure the GuitarJack settings.

The Taylor EQ app for iOS is available as a free download from the iTunes App Store.