Now boasting even greater compatibility with virtually any DAW software on the market, DDP Creator enables users to assemble a professional RedBook-compatible audio CD and then export the CD product to a DDP 2.0 fileset. 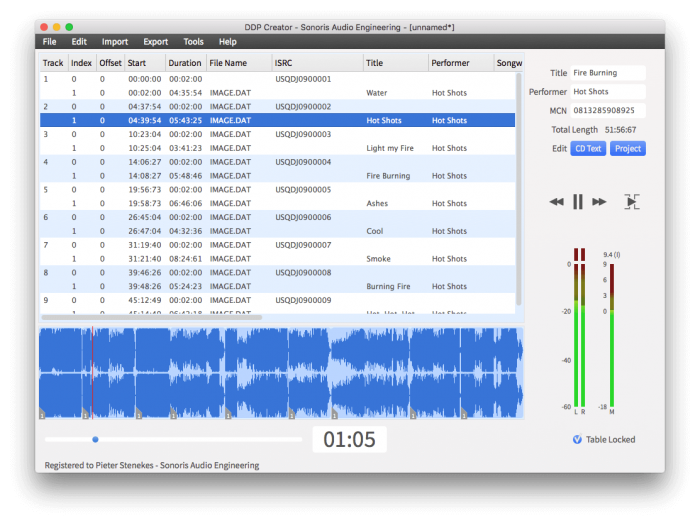 Among many other improvements, the upgraded DDP Creator features a new user interface, new loudness metering capabilities, and enhanced security through encryption — protecting masters from tampering by requiring the use of a security key. Expanded editing capabilities give users built-in functionality that once required a third-party DAW solution. In addition, DDP Creator also provides the ability to include a client logo on the CD’s PQ sheet.

“With the new version of DDP Creator, we took input from our customers to build the industry’s most integrated DDP authoring solution — with even more built-in capabilities and greater DAW compatibility,” said Pieter Stenekes, founder, Sonoris. “Along with the tool’s powerful import features and improved GUI, DDP Creator delivers faster and more streamlined mastering workflows and better quality control at a highly competitive price. It’s a true one-stop shop for audio professionals looking to create final audio CD masters without having to switch between different DAW solutions.”

Since the industry-standard DDP protocol is supported by all major CD replication plants, DDP Creator ensures error-free transfer and manufacturing of audio masters without requiring the user to burn a physical master CD. To create a RedBook-compatible master, users simply drop the mastered .wav or .aif files on the workspace and set the track order. They can then adjust the spaces between tracks and then audition their work by playing back the transition from one track into another. After editing PQ points, ISRC, MCN, and CD-Text data, users can then export the content to DDP and print a cue sheet if needed.

In addition to DDP export, DDP Creator also enables import (loadback) of DDP filesets, including DDP images created with third-party software tools such as EclipseSuite, Sonic Studio HD, SADiE, Sequoia, or Pyramix. With this feature, users are able to check and edit all aspects of the project including PQ codes, ISRC, MCN, and CD-Text data. They can then play back tracks and export to them DDP or a cue sheet, or burn a RedBook-compatible CD.

The DDP Creator Pro option gives users even greater control through support of the Enhanced CD (E-CD) format. Users can create E-CD DDP filesets from within the program by adding an ISO file to an audio project. The ISO file can be hybrid, created with a tool such as Toast, or made using DDP Creator by converting a folder holding the data files.

DDP Creator Pro is available for purchase for 249 EUR.