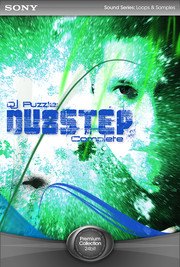 Jason grew up in the music stores of Chicago and built his skills tweaking up dozens of Sound Series titles during the ‘00s, before moving on to release more than 30,000 of his own loops and samples to the masses. Now he’s in Los Angeles making tracks for TV and film, but the urban grit survives in Dubstep Complete — a Premium Collection title that covers every aspect of the dubstep genre.

Dubstep Complete features extreme, hard-hitting basses with perfect distortion and killer bends, all the layerable rhythm elements you need to make great beats, atmospheres and arpeggios that make it easy to evolve deep tracks, and more — all in the context of six expansive construction kits and a bonus folder full of useful transition FX. Dubby, clubby, dark and growly, DJ Puzzle: Dubstep Complete brings royalty-free dubstep to your desktop in 24-bit Premium Collection sound, ready for exploitation in ACID software and any platform that supports the .wav file format.

The sample library is available to purchase for $69.95 USD.