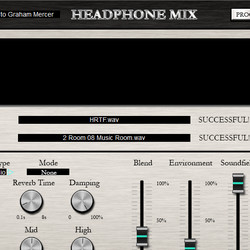 Sound Magic has announced the release of Headphone Mix 3, a speaker simulation effect plug-in for Windows.

Headphone Mix 3 is a special effect unit which suitable for those who make their music on headphone monitor system. Headphone Mix 3 combines environment simulation system, frequency compensate system and HRTF technologies to emulate the speaker feelings on your headphones.

Headphone lacks the blend of two channels (Left and Right), reverb from air and reflections from human ears, which may lead to the lack of imaging and false feelings on sound field. Headphone Mix 3 solves this issue by blending both channels, adding extra reverb to the sound and applying HRTF to emulate reflections.