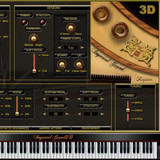 Huge Sound – Small Footprint: The Imperial Grand3D starts with the famous bright, rich Bosendorfer style sound, and establishes an incredible level of realism by using patented Hybrid Modeling Technology coupled with complete 3D Audio control. Physical modeling is at the heart of the Imperial Grand3D sound, but both sampling and synthesis are incorporated to add to the realism. Multiple DVDs, Out of Memory errors and glitches are ancient history. Only 150MB in size, the authentic harmonic colorations of the Imperial Grand3D bring an unmatched depth of sound to any style of music.

Imperial Grand3D is available to purchase as an instrument for Windows PC (VST/Standalone) for 99 EUR.

Subdivine bass instrument by Diginoiz on sale at 50% OFF regular

Save 60% on ROLI Studio sound library and plugin suite

KSHMR’s signal chain in a plugin, available at Splice Rent-to-Own