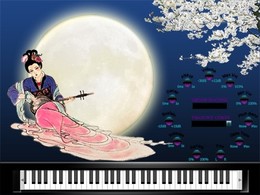 The Pipa, also known as the Chinese lute, is one of the most popular Chinese instruments and has been played for almost two thousand years. In comparison to western instruments such as violins or guitars, the Pipa has traditionally been dependent on many performance skills to produce it’s wide variations in sound.

Laurel Pipa is the largest sampled Pipa to appear on the market. Our 2.5GB library covers nearly all existing performance skills of Pipa, with over 15 categories and 60 variations.

To ensure the maximum accuracy and musicality in the reproduction of this complex and beautiful sound, Sound Magic invited the virtuoso from the prestigious Central Academy of Drama in Beijing to record their wide variety of sounds. To make it easier for you to sound like one of these world reknowned Pipa performers, Sound Magic has developed a simpler set of controls to let you control all 60 skills on the fly.

By using the best recording gear available on the market, including a Neve console, dCS AD converter and Beyerdynamic MC740 Microphones. Laurel Pipa brings you super clarity and an expressive sound. Laurel Pipa has over 2000 samples, each recorded with 24Bit/96KHz resolution for maximum fidelity.

Laural Pipa is available as an instrument plugin for Windows and Mac (VST/AU) and as a sample library for Native Instruments Kontakt. Each format is priced at 99 EUR.