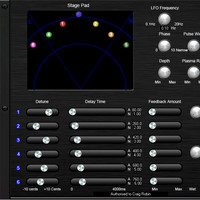 Neo Plasma is a new concept in multi delay type effects, completely unlike other systems.

Neo Plasma uses a Plasma Collision System to maximize the randomness of several parameters, creating a bigger and richer sound than is possible with standard FX boxes.