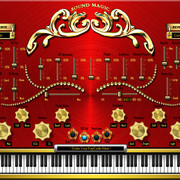 Huge Sound – Small Footprint: Imperial Grand starts with the famous dark, rich Bösendorfer style sound, and establishes an incredible level of realism by using patented NEO Hybrid Modeling Technology. Bösendorfer is known for producing pianos with a uniquely rich, singing, and sustaining tone. On the Imperial Grand, this characteristic tonal quality in part derives from the inclusion of 9 additional bass notes below bottom. Imperial Grand successfully reproduce the sound of a 1948 Bösendorfer 290SE and it also gives you the power to control the sound of this fantastic instrument in a much deeper degree.

Sound Magic’s NEO Hybrid Modeling is a completely new way to offer the best of both worlds, the Realistic Sound of Sampling and the Playability of Modeling. The NEO Hybrid Modeling Engine leads all other virtual pianos by providing a smaller footprint, lower latency and a truer, richer sound that makes our piano live and breathe!

Convertible Version is the latest expansion of our world renowned Sound Magic piano sound. It brings our piano to more formats and platforms allowing more musicians access to these fantastic sounds. Convertible Version uses the core of the NEO Hybrid Modeling Engine and adds a new simplified interface – allowing “out of the box” performance without a lot of setup time. Convertible Version introduces an add-on data bank which makes getting a huge variety of sounds fast and easy.

For the first time in history, you can custom design the look of your virtual instrument, making it your own personal creation. Spice it up – cool it down – make it your own! Our Convertible Version is the first virtual instrument that allows users to customize the GUI by adding their own personal icons/pictures. Every Convertible Version is unique!

Imperial Grand Convertible Version is available to purchase for 99 EUR.