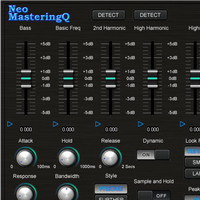 Based on Sound Magic’s Neo EQ technology, Neo MasteringQ is a revolutionary concept in equalizer technology.

Mastering Engineers often think it would be perfect if an EQ curve could change as the RMS or peak level changes. With a lot of time and a super precise frequency control, this could be done within the traditional realm. However, with Neo MasteringQ, this process is a whole lot easier. Neo MasteringQ provides a 16 Stage, 32 User Preset Changing Curve for each slider. You can achieve a different boost or cut amount as your dynamics change, giving you meticulous timbre control which will add great depth to your music.

Neo MasteringQ for Windows (VST) is available to purchase for 69 EUR. A bundle with Neo EQ is 99 EUR.