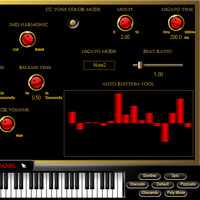 Sound Magic has announced the release of the Mac VST version of its Orchestral Strings One free virtual instrument.

Orchestral Strings One was recorded utilizing the legendary acoustics in the famous Berliner Hall – home of the world class BERLINER PHILHARMONIKER. Our full string orchestra contains 14 violins, 10 Violas, 8 Cellos and 6 Double Basses. Now it’s your turn to experience this huge orchestral section as a useful string instrument. Sound Magic has created Orchestral Strings One as a single ensemble complete with the beautiful ambience of this amazing hall. This incredible instrument will quickly become your “go to” string orchestra. No longer will you have to try and build a similar sound with several different string instruments or sections, burning up tracks, RAM, CPU cycles and your valuable time!

Changes in Orchestral Strings One

Sound Magic has also released a Concert Strings preset for Orchestral Strings One, which contain several styles of sound for users to use.

The Orchestral Strings One and presets are available to download from KVR Audio.

Transmutator by United Plugins blends your sounds in creative ways