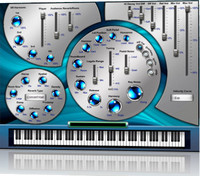 Sound Magic has updated its BlueStone Piano instrument for Windows and Mac to version 2.5.

BlueStone Piano starts with the robust Steinway sound, utilizing these powerful harmonics to create the unsurpassed authenticity and complexity that has long been a standard in concert halls around the world. BlueStone Piano has successfully captured the highly resonant wooden body flavor of a vintage Steinway built in 1927 and also managed to represents its unique singing tone through Sympathetic Resonance and soundboard resonant. It is a very emotional piano with great dynamic.

BlueStone Piano for Windows and Mac (VST/AU) is available to purchase for 99 EUR.