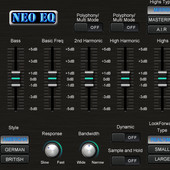 Neo EQ is a revolutionary concept in equalizer technology. Totally different from traditional EQ, Neo EQ is able to automatically detect and lock in the most audible/sensitive frequency. This makes the whole EQ process much easier than traditional EQ methods – much more efficient and effective than traditional parametric EQ.

Neo EQ for Windows (VST) is available to purchase for 49 EUR.