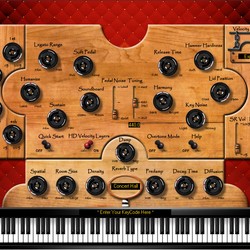 Sound Magic has announced version 2.6 of the Ruby Piano, a virtual Yamaha Concert Grand piano instrument for Windows and Mac.

Ruby Piano starts with the Famous Yamaha C7 sound, Appearing on famous concert stages, international competitions and prestigious music events throughout the world. Ruby Piano has successfully captured the mellow sustain and beautiful tones of a Yamaha C7 built in 1972, which has original ivory keys. and also managed to represents its unique timbre quality through NEO Hybrid Modeling Engine. It is a beautiful sounding and musical piano ideal for pops and Jazz.

Ruby Piano for Windows and Mac (VST/AU) is available to purchase for 99 EUR.