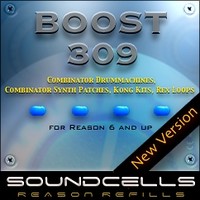 Soundcells has announced Boost 309 Version 4, an updated version of the ReFill for Reason.

“Boost 309 v4” is based on the complete sample set of the vintage, lo-fi but charmingly sounding machine Rave-o-lution 309 by a company named Quasimidi. Soundcells has created 100 brand new combinator drum machines for you with these samples.

It all ranges from the old original 309 thing to amazing and unique patches that could have never been created within the 309 itself. Besides cool beats and complex, crazy rhythms Boost 309 will offer the user even more! Version 4 is an awesome update which adds 20 combinator patches: 5 combinator drum machines (plus their 5 shuffled counterparts) & 10 great playable combinator synth patches. Not to forget about the new Kong & ReDrum kits…