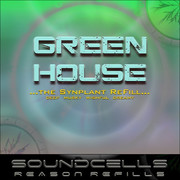 Soundcells has released Greenhouse, a ReFill based on sounds from the Synplant virtual synthesizer instrument by Sonic Charge.

“Greenhouse” is an awesome ReFill which is based on samples coming from the popular Synplant software synthesizer which is without any doubt one of the most innovative plugins of recent years.

125+ combinator patches provide an insight into the great and highly characterful sound capabilities Synplant has to offer. Greenhouse patches sound deep and murky, sometimes wishful and dreamy, but overall atmospheric and full of the typical and widely acclaimed Synplant character…

In addition, some “One-Shot-FX” kits are included to let you produce some glitchy electro beats. The 24 bit samples were recorded through an analog mixing console to bring the “real world” flavour into our digital world – ready-to-use within this ReFill. And let´s not forget about he 35+ drum samples (as well as 11 Rex files highly processed with additional EQing, compressing…) from the MicroTonic PlugIn which has been recorded the same way as the Synplant samples…