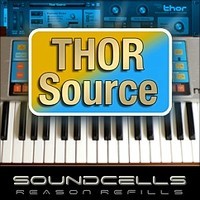 Soundcells has announced the release of its Thor Source v4 ReFill for Propellerhead Reason featuring the sounds of the Source synthesizer by Moog.

Thor’s modular design gave us the chance to rebuild the Source’s details with great accuracy. Then we copied our favorite Source patches with great ease into Thor and after this we managed to take those sounds numerous steps further. The sounding results however stayed amazingly close to the Source’s character. In this ReFill’s documentary folder you’ll find proof of this. Thor makes the Source polyphonic and velocity sensitive as well. By now you’ll understand that this ReFill goes way beyond only emulating the past.