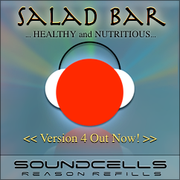 Soundcells has announced the release of Salad Bar V4, the ever-growing Reason ReFill which showcases many patches from other Soundcells ReFills.

Every time when a new Soundcells ReFill will be released, Salad Bar will get its next update. And in this way Salad Bar versions 2, 3, 4 etc, will be created. Besides this, Soundcells will also be developing lots of unique ‘Salad Bar Only’ patches.

With the coming of Simple Sampling it was clear that it wouldn´t take very long for Soundcells´ evergrowing Salad Bar ReFill to get its latest update. So they put 20 awesome Simple Sampling patches in there and they also added 15 exclusive Salad Bar patches (60 SB exclusives in total now).

With its 220+ combinators this ReFill becomes more and more a fully-fledged workstation. Apart from that it´s a real bargain for the user and an excellent ambassador for Soundcells.

The Salad Bar ReFill is available to purchase for 9.90 EUR.