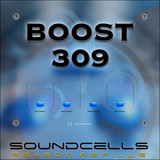 Soundcells has released version 2 of Boost 309, a ReFill based on samples from the Rave-o-lution 309 by Quasimidi.

Soundcells have created 90 brand new combinator drum machines for you with these samples. It all ranges from the old original 309 thing to amazing and unique patches that could have never been created within the 309 itself. Besides cool beats and complex, crazy rhythms Boost 309 will offer you even more!

While closing version 2 of this ReFill we found ourselves putting 200 combinators into this product. Version 2 is a huge update which adds 20 new combinator patches, 40 rex loops making use of our “Boost 309” drum machines and the original (!) Rave-o-lution groovebox, as well as completely redesigned and great looking backdrops…

Soundcells has also announced a special offer on some of its products until the end of April: