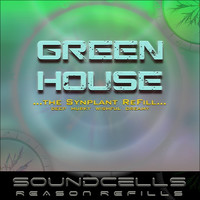 Soundcells has updated its Greenhouse ReFill for Reason to version 2.

“Greenhouse v2” is an awesome ReFill based on samples coming from the popular Synplant software synthesizer; without doubt, one of the most innovative plugins of recent years.

Greenhouse contains 155+ combinator patches that provide an insight into the highly characterful sound capabilities Synplant has to offer. In addition, some One-Shot-FX kits are included to let you produce some glitchy electro beats. Greenhouse also includes 35+ drum samples (as well as 11 Rex files highly processed with additional EQing, compressing…) from the MicroTonic plugin.