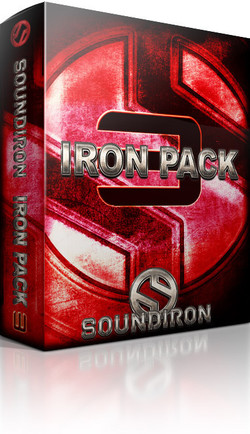 Iron Pack 03 features thirteen creative tuned percussion instruments – both short and sustained, each carefully sculpted from natural recordings we’ve made fro a wide variety of resonant metal objects and surfaces. These highly flexible patches are perfect for all styles of music, from soudtack, to experimental and atmospheric music. The final preset in the set is an awesome metallic “drum kit”, assembled from our huge Rust 3 library. We’ve included all of our favorite user controls in the Kontakt instruments, including the “Edge” knob for extreme shape transformations and the “Wind” convolution reverb selector, with 5 great halls/rooms and 5 creative FX impulses.

You’ll find regular unlocked nki presets for the full version of Kontakt 4.2.4 or later, as well as universal open source SFZ presets, for users who don’t own Kontakt. The SFZ presets can be used in the free Sforzando Player by Plogue, as a VST, AU, RTAS, AAX and stand-alone engine, just like Kontakt. It can also be used in the free Alchemy Player by Camel Audio! The SFZ presets offer many of the same core control features and playability, in a simpler interface, with the same great audio quality.