The complete overhaul comes with a powerful new engine and loads of content, featuring a totally redesigned user interface with tons of sound shaping controls as well as 20 custom FX presets. 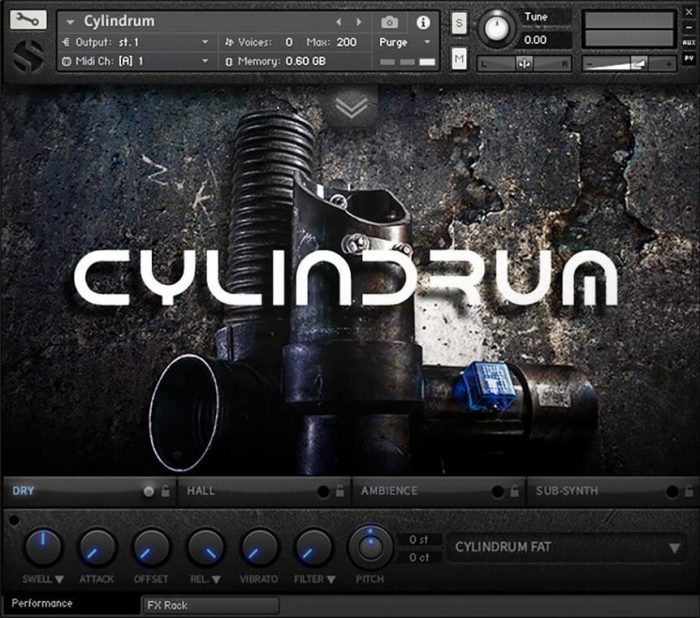 The Cylindrum is a massive tuned percussion instrument designed using the principle of open and closed air column resonance. The instrument was constructed by Gregg Stephens with the help some rather involved mathematics, plenty of elbow grease and quite a few bloody fingers. The end result is a massive 20-foot-long tuned percussion instrument with a pitch range spanning a full 4 octaves. Overall, it sounds like a strange organic synthesizer coupled with tuned tom toms. With deeply nuanced dynamic velocity layering and extensive round-robin variation, this instrument is truly an experimental percussionist’s dream come true.

Our Cylindrum library contains three separate variations of the instrument: dry small, dry fat and wet. The small set is made from a series of 1½-inch diameter PVC water pipes played by tapping fingers over one end, with a microphone positioned at the far end. The fat version is made from a series of 4-inch ABS corrugated plastic tubes with an open-ended rubber port hole, played with a ping pong paddle. Both sets were recorded in a dry studio room, giving them a full, resonant and fat tonality perfect for arpeggiated melodies and driving bass lines. The wet version is built from 4-inch ABS corrugated plastic tubes with felt mallets on a 3/8″ heavy rubber cap, recorded in an ultra-wide stereo array in a lush glass and tile hall. This slightly more distant sound and closed port delivers a much more brutal transient impact perfect for dramatic scoring and layering with other percussion.