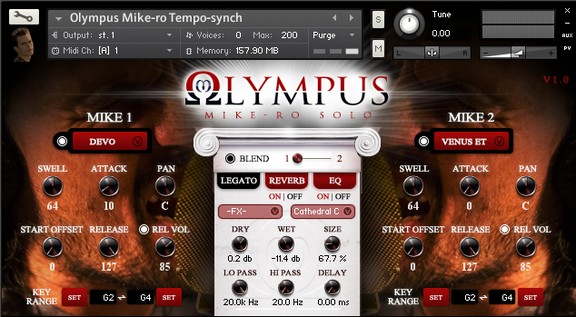 Actually, this is just a fun, yet totally functional micropack that shows a little of what goes on behind the scenes at Soundiron as we research new production and sampling methods. When you’re dragging a full choir into a hall to record, it’s generally a good idea to have an idea of what you want them to do before you roll tape. Soundiron’s official in-house trained monkey (Mike Peaslee) likes to fancy himself a singer, usually somewhere in the tenor range. Since he was sadly born without a sense of shame or decorum, he’s literally willing to do anything on command if somebody’s recording. So we tend to use him as a human guinea pig quite a bit.

What you’ll find here is a collection of 5 poly-sustain chants, with Latin and Slavonic Russian content, along with common vowel sustains (Ah, Eh, Oh, Oo) that we recorded during the production of our Olympus Symphonic Choir. These tests helped to inform our approach to editing, recording and programming for solo voice in a hall environment.

We’ve included a pair of improvised long Latin phrases based at 130 bpm and three common multi-syllabic Slavonic words taken from the Angelic Salutation, each recorded at 100 bpm. We include standard vowel sustains Ah, Eh, Oh and Oo. This mighty little solo tenor vocal library includes nearly 100 vocal samples and 180 MB of data. It also contains a couple of sweet-ass ambient and atmospheric bonus presets and radical special FX and room convolution impulses built right into the interface. Check out the solo demos by Sascha Knorr and Freewayland to hear some of that illbient vibe for yourself. It’s pretty sick. It also works great with Olympus Micro and any of our professional full-sized symphonic choir libraries.

The sample library is available to purchase for $4.99 USD.