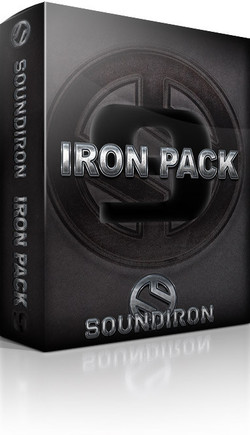 Soundiron has announced the release of Iron Pack #9, a micro instrument library for Native Instruments Kontakt, developed on premium analog hardware, including an Elektron Analog Four and various filters and effects.

The circuitry is modern, but each of the 12 custom patches designed by our own Spencer Nunamaker was inspired by classic vintage sounds, with the full body and warm you expect from analog synthesis!

Each patch in Iron Pack #9 was created by meticulously constructing unique signal path and modulator routings, often with multiple LFOs effecting each other both parallel and in series. Once the path was designed, Spencer brought them to life, capturing their organic flavors in real-time, using a variety of velocity, joystick and envelope stage mapping to modulate different parameters, LFOs to modulate other LFOs, combined with after-touch LFO depth/speed modulation and other wild-card tweaks to generate awesome chain-reactions. The result is a warm, rich set of great synth patches, each with a host of sound-shaping parameters that let you further manipulate them into your own new custom sounds with the help of our GUI. The sounds a crisp, high-fidelity and modern, but there’s a strong element of retro-fatness in each of them.

You’ll find regular unlocked nki presets for the full version of Kontakt 4 or 5, as well as open source SFZ presets, for non Kontakt users. The SFZ presets can be used in the free Sforzando Player, the free Alchemy Player by Camel Audio and many other compatible engines.