The collection focuses on dynamic live tuned and untuned percussion performances by British instrumentalist and media composer David Oliver, known for his brilliant and expressive soundtrack work on award winning programs for BBC and National Geographic. 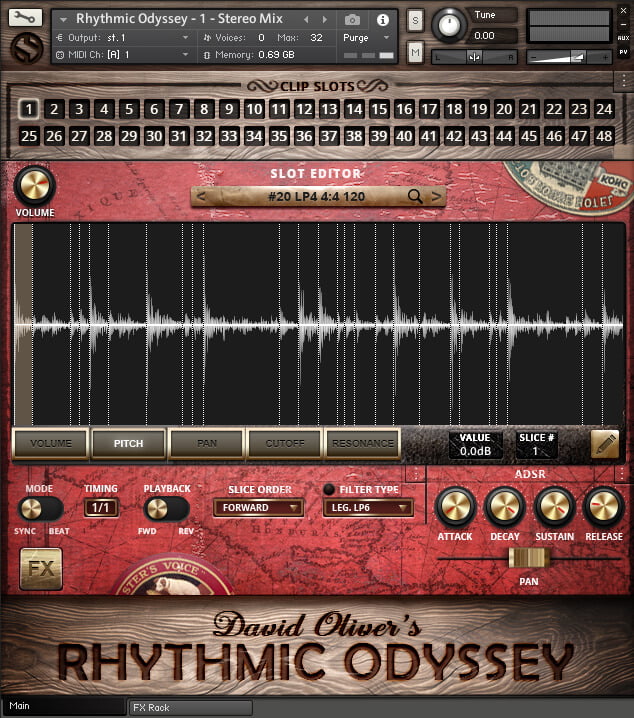 The library spans a range of styles and genres, with 100 percussion track sets ranging from traditional ethnic arrangements and combos, to raw, hard-driving percussion beds and rock grooves. Each song set is designed to be a tonally rich and creatively inspired mutli-track piece, with unique arrangements and exotic instrumental selections from all over the world.

Each of the 100 of David Oliver’s original rhythmic compositions included within this library has been broken down into up to a dozen modular seamless loops, with natural musical development and dynamic progression evolving naturally from intro and build-up to climactic release. These building-blocks are further deconstructed into distinct sub-mix and solo instrumental tracks in the Multitrack preset, allowing you to mix and match elements to create a user’s own unique layered rhythmic combinations.

The built-in loop browser lets a user filter their search by style and instrument keywords, tempo and time signature and you can even star your favorite loops for instant recall. Once a user loads their loops into the slot grid, they can tweak each loop down to the individual transient slice, with playback direction, slice order, ADSR and custom step-automation sequencing for volume, pitch, pan, filter cutoff and resonance parameters that they can freely draw with your mouse.

Save 79% off Sound Solutions Bundle by Composers Tools!