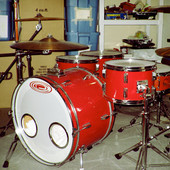 Sounds Outside the Lines has released Basement Drums, a free sample pack featuring a drum kit for EXS.

Captured at 44.1kHz/24bit using only a pair of Shure SM57s and an Apogee Duet, Basement Drums captures the authentic sound of an average drum kit with round robin layering and multiple velocities. For times when other drum sounds are too “clean”, “produced” or “even” Basement Drums could be your secret weapon.

More information: Sounds Outside the Lines