SoundSpot has released MSW2, an update to the stereo imaging effect plugin for Windows and Mac.

MSW2 offers a complete overhaul of the stereo enhancer and mono maker algorithm, and now includes 2 independent bands which allow you to alter the stereo information based on frequency crossover. 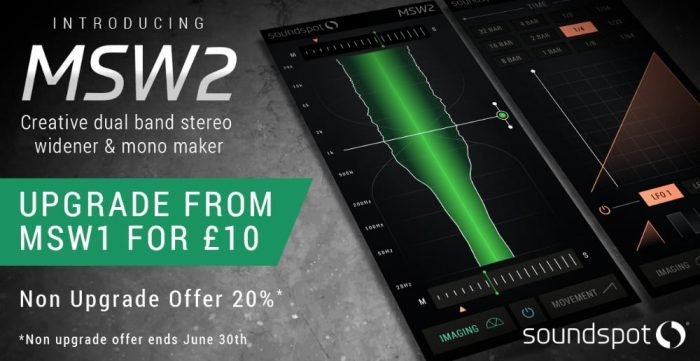 After the soaring success of our MSW1 single band mono maker and stereo expander, SoundSpot decided it was time to give this hugely popular plugin a new lease of life. With that in mind, they started the development of the MSW2.

The new MSW2 is a complete overhaul in terms of code, interface & creativity, it can be used both subtly for better mixes, or pushed to the extreme to achieve a host of creative possibilities in the stereo field.

MSW2 (VST/VST3/AU/AAX) is on sale at Plugin Boutique at an introductory 20% discount, priced at £38 GBP. Users of MSW1 can upgrade to the new version for £10 GBP.

Save 50% OFF on Symphobia orchestral libraries at Native Instruments