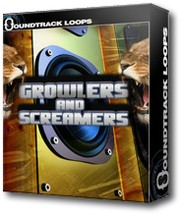 Soundtrack Loops has announced the release of Growlers and Screamers, a royalty free set of loops and samples for producing Dubstep.

147 loops in total PLUS 135 promo drum one-shots and 27 promo loops from a few other Dubstep releases by the same producer. Tempo and key info is included in the file names as well as embedded as meta-data. Produced for Soundtrack Loops by Jason Donnelly (Dj Puzzle)

Growlers and Screamers is available to purchase for $25.95 USD.